A plan to redesign Yonge Street in Willowdale is becoming one of the more controversial decisions facing city council, and it could be voted on Monday.

City staff, local Coun. John Filion, a group of more than a dozen high-profile city builders, several advocacy groups and many area residents are supporting a plan to reduce Yonge Street from six lanes of traffic to four, while widening sidewalks and adding bike lanes.

Cherise Burda, who heads Ryerson University's City Building Institute and co-signed an open letter to council on the matter, told CBC Toronto that city hall has a "once in a generation opportunity" to get this right, noting this version of Yonge will exist for the next 50 years.

"We need to imagine a brighter future for Yonge Street North … towards a bolder vision of who streets are for: people," states the letter, which was also signed by former mayor David Crombie, ex-top planner Jennifer Keesmaat, Richard Florida and more.

A Yonge Street with fewer lanes for cars and raised lanes for bicycles? That's the vision for Willowdale that's being recommended by city staff. (City of Toronto)

However, Mayor John Tory is pushing an alternate design that will maintain the roadway, moving the bike lanes to a nearby road. The plan will cost some $9 million more, but Tory says it will mean traffic will continue to flow through the area.

Tory told Metro Morning last week that he's still open to hearing both sides of the debate but, "I also have a job to do to keep the city moving."

The vote is expected to be close, with Filion vowing to do everything he can to rally support behind the transform plan.

Councillors will have questions

Here are some key questions that need to be answered:

What is the safest option for the street?

Several residents told the public works committee that crossing Yonge Street, as it exists now, is a scary prospect. Many safety advocates say the only way to protect pedestrians is to narrow the roadway. However, even councillors who pledge support for the city's Vision Zero are leaning toward leaving all six lanes of traffic.

What are the traffic impacts?

City staff suggest traffic — about 75 per cent of which is heading to and from York Region — will only be slowed down between 30 seconds and a minute. Some councillors will likely have questions about that.

What will benefit the area most?

Willowdale is a booming area of Toronto with upwards of 75,000 people living and working there. Expect questions about how those people will be affected by council's choice.

Pedestrian safety all over agenda 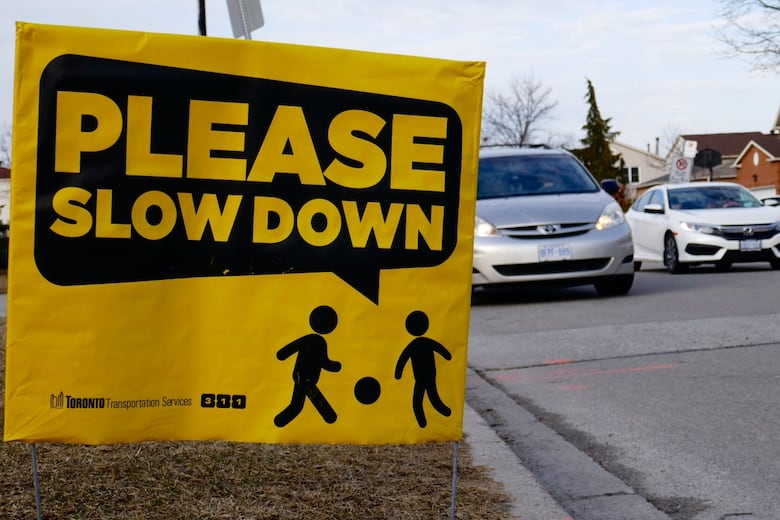 The city offers signage encouraging drivers to slow down, but councillors want a second look at what it takes to install more permanent measures like speed bumps. (Tina MacKenzie/CBC)

The group Families and Friends for Safe Streets plans to hold a "die-in" at city hall Monday afternoon to demand more measures to enforce road safety.

At least 12 pedestrians have been killed on Toronto's streets already in 2018, according to police statistics. City council now appears ready to act.

Coun. Janet Davis has submitted an administrative inquiry asking why she didn't get a response to her call for a review of the city's warrants for traffic control measures — essentially, an overview of the conditions that need to be in place before the city will add speed bumps, traffic lights or pedestrian crossovers.

Davis asked for that review at the end of 2016. Now city staff are vowing to have it done by this May.

Coun. Jim Karygiannis is also asking for new measures to bolster the city's Vision Zero plan to eliminate all traffic-related deaths. Karygiannis has also been pushing for speed bumps to be added near the school in his Scarborough-Agincourt ward where 11-year-old Duncan Xu was struck and killed while crossing the street on his way home in February.

Karygiannis panned the city's goal of improving the safety around 20 schools a year as simply not good enough.

"Where there's areas that need to be addressed, we need to address them now," he said.

"Everybody deserves to go home in the evening safe to their loved ones."

City council is set to meet for three days, beginning at 9:30 a.m. on Monday.