The Bank of Canada held interest rates steady as expected on Wednesday but said the escalating U.S.-China trade war was doing more damage to the global economy than it had forecast in July.

The central bank — which has sat on the sidelines since last October — maintained its key overnight rate at 1.75 per cent and made no mention of future moves. The current level of stimulus remained appropriate, it said, reiterating the pace of Canadian economic growth would slow down in the second half of the year.

The negative effects of the trade conflict between the United States and China were “weighing more heavily on global economic momentum than the Bank had projected in its July Monetary Policy Report,” it said.

Looking ahead to the next rate announcement on Oct 30, the bank said it would “pay particular attention to global developments and their impact on Canadian growth and inflation.” 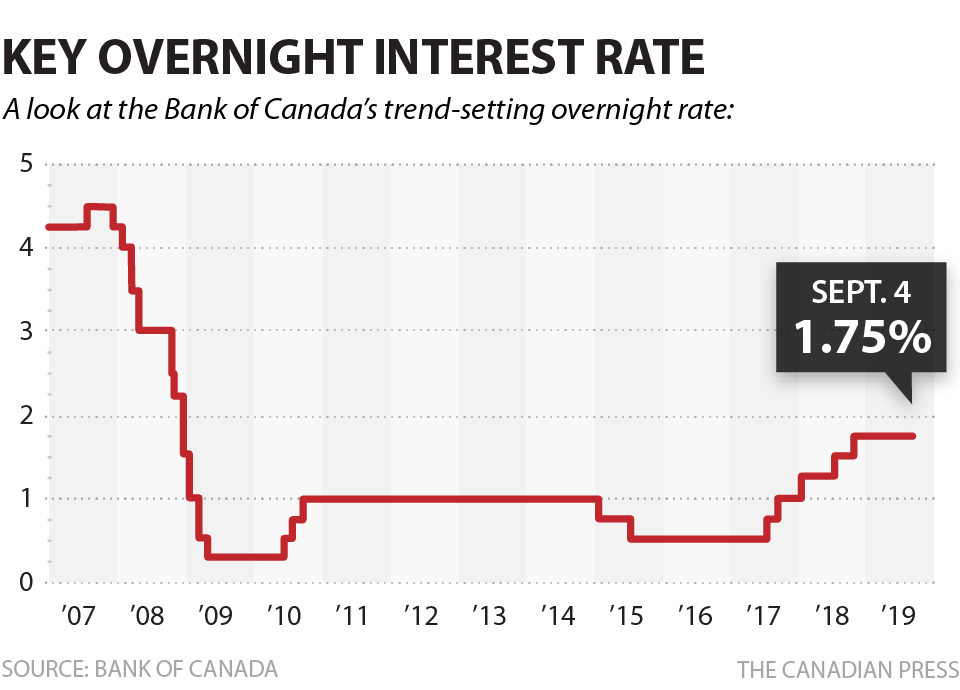 The bank, which has showed no appetite for cutting rates amid steady domestic activity, has sat on the sidelines even as some of its counterparts eased borrowing costs or signaled their intention to loosen monetary policy.

A Reuters poll released last week found economists were divided on whether the bank would cut rates this year or hold off until early 2020.The Bank of Canada noted the domestic economy was operating close to potential while inflation hovered around the central bank‘s 2 per cent target.

It added, however, that given the increasing uncertainty about trade and falling second quarter business investment and consumption spending, “the bank expects economic activity to slow in the second half of the year.”

Data released last week by Statistics Canada showed the national economy grew a surprising 3.7 per cent in the second quarter, nearly 1.5 per cent higher than the Bank of Canada‘s estimate of 2.3 per cent. The bank has said it expects growth in the third quarter to be 1.5 per cent.